When the Autonomous University of Port-au-Prince tribute to Dr. Makindi Guerrier 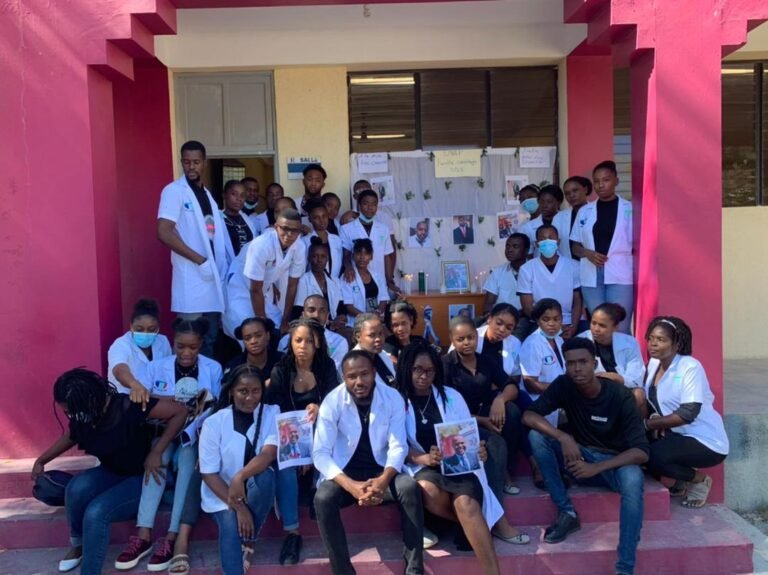 In the middle of the day of Monday, December 13, 2021, the students of UNAP, together with the deanship of the institution, organized a tribute ceremony to Dr. Makindi Guerrier, former professor of endodontics for students in odontology, died 48 hours ago. Lighting of candles, exhibition of photos of the deceased, testimonies of certain students and professors…, this ceremony was above all marked by the desire of the students to demand justice for the deceased.

Accompanied by his wife, Ms. Esther Laguerre Guerrier, Dr. Makindi Guerrier was trying to escape a kidnapping attempt in Bois Verna on Saturday December 4th. Hit by several projectiles, the dentist was rushed to a hospital in the capital, his wife was shot in the face after the car hit a wall.

After refusal by hospitals in the United States and Cuba given the worsening of his case, a hospital in Santo Domingo responded positively to distress calls launched by his fellow doctors. Four days after his hospitalization in neighboring land, Dr. Guerrier gave up his soul on Sunday, December 12, 2021 at 4 am.
A news that gives shivers down the spine. The population has expressed their deep indignation on social networks and traditional media.
To this end, the Autonomous University of Port-au-Prince paid a heartfelt tribute to Makindi Guerrier, who left too early.
Students Carl Émile and Brice Christopher served as MCs, although to the naked eye they were more than anxious.
A decor imprinted with photos of the deceased, and slogans on signs such as: “Nou te renmen w”
“Wap toujou Rete nan kè nou”
“Repoze anpè Doktè Warrior”
“Dr Guerrier nou pap janm bliye w”
“Mesi leta pou Kado nwel”
“Nou mande jistis pou dokte a” etc.
The reactions were some more frustrating than the others. For student Carl Emile, “who would have thought that today we would be gathered to pay a final tribute to our teacher, Dr. Makindi Guerrier. We continue to demand justice for our teacher, even if in Haiti, justice is almost non-existent, ”he said in an angry tone.
Brice Christopher and Guerrier Grétha Danie, two instigators of the activity, closed the ceremony while hoping that light be shed on this issue. They promise that they will do their utmost to ensure that this matter is not buried as usual.
Throughout this week, students will wear dark colors, candles will remain lit and photos of the deceased will remain on display, according to student Grétha Danie Guerrier.